Are Epoxy tabletops eco-friendly? Are they better than glass table tops ?

Home » Blog »  Are Epoxy tabletops eco-friendly? Are they better than glass table tops ?

Resin tabletops are in trend for their interesting but unique aesthetic appeal. They feature a glass-like hard and glossy surface with a ‘river flow’ pattern. Thus, they are also known as river tabletops. They are made using resin, a material that is virtually indestructible and unbelievably durable but is it eco-friendly / degradable?

The material also contributes to easy cleaning and customized designs simulating a wood grain or flow appearance or showcasing interesting memorabilia such as flowers or shells. The overall appearance is like it has been made coating wood with liquid glass. Yes, it is more durable than glass but is it as eco-friendly as glass? Let’s find out.

What is Epoxy Resin?

Resin is a natural organic compound existing as a viscous substance (semi-liquid or liquid) and formed with two-component parts. In simple words, it is a solid plastic that you can mold into different forms and shapes. This makes it useful for many craft, commercial, and industrial projects, including 3D painting. Resin can have both solid and highly viscous ingredients although it is a liquid that tends to harden when exposed to light, heat, and certain chemical agents.

Resin is most commonly used as a glue to clasp fibers, alleviate stress between them, and defend them from harsh external factors. The natural resins come from trees, plants, and germs. However, as they are flammable and melt easily, the modern industry has replaced them with synthetic resins that are made using natural components having additives or synthetic polymers called epoxy resins. Epoxy resins, also known as polyepoxides, are a class of reactive prepolymers and polymers which contain epoxide groups

They also have good strength even after being heated or exposed to high temperatures, higher melting point than the degradation temperature, and shape integrity, meaning they do not warp or deform in extreme cold or hot temperatures.

When sanded and polished well, these resins give a shiny, transparent look like glass. In the world of tabletops, epoxy resin is one of the commonly used thermosetting resins. Epoxies are admired for their great adhesion ability, great insulating property, and heat and chemical resistance. They are widely used in adhesives, paints, coatings, and as a base for fiber-reinforced composites
Let’s now see how an epoxy resin is used to make tabletops.

How Are Resin Table Tops Made?

A thermosetting resin as a viscous substance reacts to some substances known as hardeners and to certain conditions such as heat. The chemical reaction is known as polymerization in which long molecular cross-chains are formed to hold the molecules in place and transform the liquid into a solid form. In other words, this thermoset sets or cures to harden itself via heat or radiation. Thus, this polymerization process is also known as curing.

For making a tabletop, epoxy resin (usually white) is mixed with a hardener (typically yellow), the result of which is a solid durable plastic or polymer. This process is irreversible, meaning unlike a hermoplastic, a thermoset cannot be restored to its original form.

The thermoset resin becomes fixed in a solid state after being cured once due to the irreversible bond of molecules. Once hardened, you can pour another of resin mixed with different colors to make a visually appealing tabletop. This irreversible hard state means that the resin will not melt even in extremely high temperatures. While this is commendable, there is a big drawback of such a chemical reaction.

These cured resins used for making tabletops are not re-moldable and, thus, are not recyclable although one can cut and use them as fillers. They are not biodegradable, as they take over a hundreds of years for the same. So, throwing away broken or damaged resin tabletops as waste cause environmental pollution.

Thus, it is worth choosing a resin tabletop if you are never going to throw it, or else, it will result in a huge non-degradable waste. Thus, for the fans of the environment, a tabletop made up of n easily recyclable material such as glass is a better option, glass can be recycled and it is completely eco friendly material. 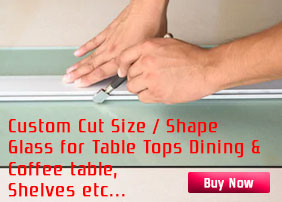